What fun I had yesterday at Basil’s birthday pawty – I hope you all were able to stop by to wish him a happy birthday!

Several of you said you thought those photos of me in my “muscle” and “no muscle” conditions were hilarious (or scary) and it got me thinking about some of the ridiculous photos Mom’s done before………..Yes I’ve shared SOME of them but thought I’d show you a few more for a good Friday Giggle-fest!

If you were drinking coffee while looking at my slideshow I hope I got you giggling enough to spurt coffee out your nose………..now THAT’s a fun way to start a Friday!   Aren’t I a little devil??

HAVE A GIGGLY HAPPY FRIDAY EVERYBODY……….why?

Because I love you!

Hi Everybody!  Before I get to the SILLY stuff, I wanna say a couple of things………first – a big thanks to all of you who stopped by yesterday and commented on my “Baby Love” blog…..we were asked by a friend to participate in a “blog baby shower” for my Mom’s friend Miss Katie Huneycutt who is expecting a HUMAN baby (!!) soon.  Your words of advice were sweet…….she appreciated them!

Secondly, I want to say that yesterday was my Mom and Dad’s 22nd wedding anniversary…..I didn’t mention it in yesterday’s blog because the blog was specially FOR Miss Katie.  However, I helped my parents celebrate their anniversary by being extra adorable and sweet ALLLLLLLLLL day!  😀 😀

See I’ve been thinking lately that  rather than lying around the house all the time taking naps in tents and on tissue and whatnot, I’d take up a hobby.   My Dad has hobbies – flying, tinkering, electronics – and my Mom does too – writing, painting, gardening…..but what about ME????

I understand there’s a whole lot of money to be had banging a little white ball around on the nice green grass with a stick.  If you think about it, that’s not a bad job now is it??  I don’t want it for a JOB though – just a hobby.  Something to do in my considerable amount of leisure time.

It’s either that or I was reading in the paper that they need actors in this way cool place called Medieval Times……it’s a great big arena kind of place where they dress up like knights in shining armor or serving wenches (Mom says I’m not allowed to explain what those are) and you get to have dinner there and watch the show with knights on horses and stuff.  Sounds kind of interesting.

Another hobby that might work is the Scottish Piping Band which has its’ headquarters out here in the town where I live.  Of course we aren’t in Scotland, but there’s a group that entertains at fairs, festivals, carnivals and things like that.  I’ve always thought THAT would be pretty cool – the only thing I’m not too sure about is wearing a skirt.

So much to think about with choosing a hobby isn’t there????  Maybe I should take a nap and think a bit more about it before jumping into something drastic……giving up nap time is a BIG decision after all.

What do you think?  Do you have a hobby?  Do you think maybe there’s something I haven’t thought of that would be good for me in my spare time?????

Happy Sunday!  It’s too early to tell (and Mom hasn’t been outside to check yet) but we MIGHT have a cooler day today – that MIGHT mean I won’t be complaining about the heat – which MIGHT be nice for all of you to not have to read about me in my afghan tent to escape the heat!

Instead, I thought I’d entertain you a bit with some silly photos of me from past blogs.  Mom did these with the help of the software that came with her digital camera.  They make me laugh and I hope they make YOU laugh too!!

My white chest hair looks like a beard – Daddy says they’d NEVER allow beards in the Navy – and this is a Navy pilot’s uniform – wonder if I’ll get in trouble for BORROWING it??????

I do look rather smashing in this fancy suit….I think I’m looking for the door back into the spacecraft….gee, I hope I have my key with me!

…..and if elected I promise there will be nip for everyone!….. 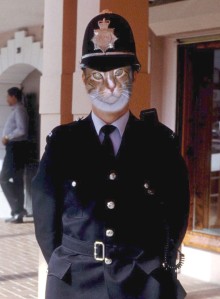 Think I could sneak on the grounds of Buckingham Palace dressed like this??????

AND LAST BUT NOT LEAST…….

OK so now that you’re all rolling in the aisles, I guess it’s time to be on my merry way.  Besides, Mom’s heading down the driveway to get the Sunday newspaper and depending on whether she’s hot and sweaty or cool as a cucumber, I’ll know if we’ve lucked out and got BETTER weather today!  Here’s hoping!

Me On Vacation Visiting Some Distant (very) Cousins!

Hey all…..thought I’d break open the old vacation album and share some of my favorite snaps with you!  This first one is a real doozy isn’t it?  Well, there I am in my Maharaja regalia with some of my cousins….Chester Cheetah, Louisa Lioness, Mack the Monkey and Elija the Elephant are buds of mine I met on my trek through the Indian desert a few years ago.  Pretty “dashing” huh?

Then a couple of summers back I visited Jolly Old England and got a chance to work a little part-time gig on the busy streets of London.  AND I got to wear a uniform too!

Yep - I look pretty smashing in my uniform huh?

Don’t I look swell in my Bobby uniform?  Sam the Bobby (or is that Bobby Sam?) – anyway, it was fun while it lasted.

Last but not least, here’s a little recreational activity I tried a few summers ago.  It didn’t turn out too well – I ran into a flock of Canada Geese flying south and they didn’t like me violating their sir space!

Hang-gliding isn’t for sissies that’s for sure…….it was a lot quieter than I’m sure flying in my Dad’s plane would be, but I think I’d rather be in the plane than hanging in space.  Yep.  No doubt about it.

So, there you are……just a few snaps among friends.  Never a dull moment in the life of Sam the Adventurer (at least in my dreams anyway!!!).

OK….you asked for it….Mom got me this silly visor with sunglasses THING and I’m trying to humor her by allowing her (just barely) to take my picture in it!  Of course I’d never sit still long enough for her to put it on me – SOOOOO – Daddy picked me up, put me on his shoulder, Mom stuck this “thing” on my head and whammo – I tried really hard to avoid the photo taking deal.

As you see – THEY won, but I did manage to squirm so much that one of the pictures is blurry and the others are – well – not so hot!  LOL

How's a guy supposed to look dignified in this hat???

And here are the other two pictures I allowed (just barely) Mom to take…….LEMME DOWWWWWWWWWWWWWWWN!!!

Dad I can't believe you helped Mom do this to me!

Daddy’s punishment for helping Mom carry out this injustice was for me to dig my claws into his new yellow polo shirt……LOL……it’s only fair if you ask me.  At least I didn’t  cause bodily harm – just a couple of minor holes.  Let that be a reminder to you that I’m a CAT not a DOLL to be dressed up and paraded around.
Harumph!

At least I managed to squirm enough to cause a blurry picture! HA!

Last but not least…..and notice that I was so wiggily and Mom was in a big fat hurry to take this picture that it’s a bit blurry……you know what?  I look pretty good in this thing don’t I…..rather debonaire and cool – like I’m ready to go out and play a game of tennis or something.  Maybe I made too big a deal out of this whole “hat thing”……
I bet the young lady cats in the neighborhood would be impressed if they could see me in this visor.  Quite the dude.
OK…..I officially forgive my parents for ganging up on me and taking these pictures.  Besides, they seemed to find it quite entertaining and anything I can do to make them happy, I’ll do!  After all, that’s what they do for yours truly…………..
So what do you think folks?  Am I quite the dude or what?
Happy Sunday (and I do mean SUN)…………..
Sammy, One Spoiled and Extremely Cool Dude