Hello!   Happy Thursday!    We are officially back from a small “take a breath” break – I had fun at the SPA (kennel) and my Mom and Dad got “refreshed” being away for a few days to York, Maine.    Every year they desert me for that place – what’s the big deal????

Now on with the show.   I’m THANKFUL that Mom and Dad are home and THANKFUL that we can get back into our usual routine.    I’m a creature of habit after all AND I missed them!

I was happy to see that Angel Sammy transmitted his regular Wednesday night email to me which contained his poem for this week’s Poetic Thursday.    Are you ready to read it?   I am.

I had a busy week keeping watch over not only Teddy at his kennel but my Mom and Dad as they enjoyed their usual getaway spot for a few nights in Maine.    I remember being the one who had to stay at the kennel when they went so I kept Teddy company (secretly of course) while he was there.

Did you write a poem this week for the photo I gave you last week?    Indian culture has always fascinated my Mom – that’s why I chose this photo for this week.

Tribal customs of every type

Guidance from spirits great and small

Protective of the land, a “careful” trust

Then came the visitors who decided to stay

The Indians’ lives re-fashioned in a very big way

Over time things changed for the tribes of old

One thing has remained – their spirits are still bold.

Here is a little updated information about Indians in my home state of Virginia…….

In 2016, the Bureau of Census estimated there were 29,225 Virginia residents who identified as “American Indian and Alaska Native.”

There was a massive demographic impact to Native American populations after permanent English settlement began in 1607. The exact numbers are less clear than the impact, but there may have been 50,000 or so Native Americans in Virginia in 1607. About 15,000 Algonquians lived under Powhatan’s control in Tsenacommacah, and perhaps 10,000 others on the Coastal Plain.

As a result of the demographic changes since the Europeans arrived and legalized discrimination, including the Racial Integrity Law of 1924, the Totero, Gingaskin, and many other tribal groups have disappeared as organized communities. All Native American societies were disrupted and populations dramatically decreased. Despite the assaults, as one member of the Chickahominy tribe has noted, “Well, we’re here. We never left.”

Many died from disease and starvation, after being forced from traditional homelands by colonists seizing land for farms. Others died in direct conflicts with the English. Constant small-scale murder and skirmishes were interrupted by occasional large-scale wars, including major uprisings in 1622 and 1644 and brutal suppression during Bacon’s Rebellion in 1676.

Many original Virginians migrated as individuals or family groups to the north, west, or south, away from the encroaching English. They joined the Iroquois, Shawnee, and Cherokee, losing their distinct identity as members in traditional Virginia tribes.

Currently there are 11 state-recognized tribes. All but one are located east of the Blue Ridge. The Monacan use Natural Bridge State Park to display their culture, but most members live in the Blue Ridge rather than in the Valley and Ridge province.

Interesting huh?    Anyway, this was fun research and a FUN poem to write……………………..we hope you have written a poem today?  Please share with us that you did by putting your link in our comments.    I have another photo for you for NEXT week………..here it is:

Let your imaginations take a trip into poetry land and see what you come up with to go with this photo for next week!!    Hope to see you here then. 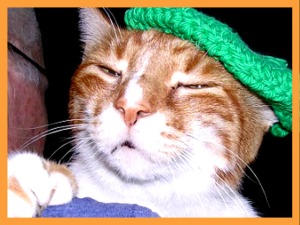 I am the Angel Poet in the green beret…..and I hope you join me for POETIC FUN each week!

See you  next week from the Rainbow Bridge – Love, Angel Sammy

Thank you Angel Sammy……I love “hearing” you every week……Hugs, Teddy

48 thoughts on “Thankful and Poetic Thursday”