I’m HERE To Tell You!

Hello Class!    Welcome back for the “FINDING IT ALL OUT” day which we call the TELL ALL………………….here’s where we separate the men from the mice (or is that the men from the boys?) – well it’s something like that.   Anyway, before we start we have to make a BIG FAT APOLOGY!

Actually it’s WordPress that should be apologizing……………..it neglected to SHOW a post yesterday morning until five minutes after it actually SHOWED it posted – if you can figure out how something like that can happen then you must work for WordPress because we don’t have a clue.   BUT the boo boo resulted in us telling a pile of fans here that THEY were FIRST COMMENTERS when in actuality someone ELSE was!

Shall we untangle that mess for you?    OK – my buddy, pal, and Cousin Bacon was TRULY the FIRST COMMENTER…………his post was at 8:51…………….he was the only one to post at that time……….but the FIRST posts Mom, me and Teddy saw were a pile of them that came in at 8:52AM from Friends Furever, Calvin/Oliver, AND Kitties Blue.    So Mom quickly told all of them that THEY were the FIRST COMMENTERS……………….WRONG!

Here is the BADGE for our ACTUAL First Commenter – Bacon…………….here you are buddy – wear it in good health!

AND, here are the SAM’S BOO BOO awards (which actually should be WordPress Boo Boo awards!) for Friends Furever, Calvin/Oliver and Kitties Blue!!!

Suzie – maybe you can say it better than I did???

We’re sad as sad can be
Please hear our pitiful plea
Purrhaps we shouldn’t SAY
Who’s FIRST on Teaser Day
We’ll make you wait and wonder
‘Til you get mad as thunder!
“Did I, or didn’t I?” I have to wait and see
Or we can tell you what we think
And go on merrily!
I guess there will be boo boos
And probably some boo hoos
So let’s just keep on teasing
MOST of you we’ll be pleasing!
So don’t worry Prof Sammy
I won’t give you a Suzie WHAMMY! (this time!)

Gosh thanks Suzie…………….now let’s move on shall we?    Here’s the other part of the WEIRD day yesterday was………………..the photo was IMPOSSIBLE!   Nobody guessed it and I can see why because there just was NO CLUE in the whole darn thing!   It was what I’d call an IMPOSSIBLE CONUNDRUM TEASER!    It was a Guest Teaser sent in by Gracie who got it from her Mom’s friend.   Here’s your badge Gracie!

Alright I hear ya!    It was a sneaky Teaser but once in a while we should have one that SHAKES THINGS UP right?    I’d say this one did just that……………..nobody guessed it and it was a big mess on First Commenter.

How about everyone who guessed incorrectly????   What about them???   Well you’ll not be surprised to hear that there’s a GREENIE for you! 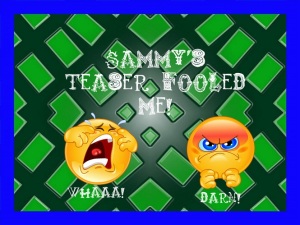 I SAY WE MOVE ON!

I agree with Sarge!

Good!   Wonder where in the world we’ll go NEXT Tuesday then…….guess we’ll find out in a week!

Teddy and I hope to see you NEXT week!!

58 thoughts on “Teaser Tell All”