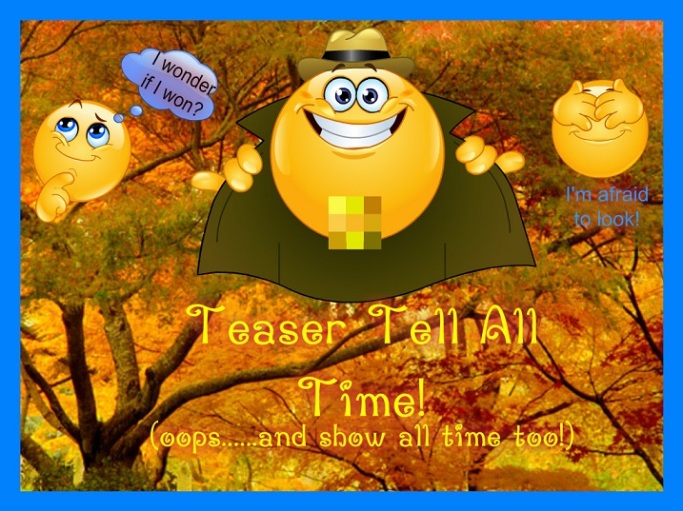 Tell All Time!!!  Come in and take your seats class!

Good Morning Class!     Yesterday in class we shared a doozy of a Teaser photo and honestly thought we would fool everybody.    It seemed to us that it simply didn’t have enough “hints” in it to give it away easily.   So it was a BIG SURPRISE when fairly early on it was guessed!

But before we talk more about THAT, let’s give you some other news about the Teaser…………like WHO was the FIRST COMMENTER?     We had TWO in the first sixty seconds after going live and they were my good friend Mr. Leo of WalkAndPigOut and Miss Carol of CarolMaeWy.    Congratulations to BOTH of you who were ALERT and ready to comment on the Teaser blog!!    Each of you is now the proud owner of one of these babies:

Would you like to know WHO my Guest Teaser was yesterday?    It was the Kitties Blue and their Mom Miss Janet from The Cat On My Head !!    I thank you for sending that one in because it was a “pip” of a Teaser photo……………..and this little badge is my token of appreciation:

Here’s the photo from yesterday and it’s a picture of the confluence of the River Danube and the River Sava in Belgrade, Serbia!  More specifically, this photo shows the Kalamegdan Fortress and that tower is the Nebojsa Tower.    Here at this LINK you can find out a whole lot about this spot AND even more about traveling in the city of Belgrade, Serbia.

Thank you to my Guest Teasers for this pawsome photo……………..so WHO was first to guess right?    It was one of my FIRST COMMENTERS who got that honor – Miss Carol!   YAY!   She guessed Belgrade, Serbia and since I didn’t ask what specifically was shown in the photo SHE was first to be right.   This is for you Miss Carol!

I have to give SPECIAL MENTION though to Mr.JackFreckles/Pipo & Minko for guessing right that it was the Nebojsa Tower at the Kalamegdan Fortress in Belgrade, Serbia – they gave me SPECIFICS but I got their guess AFTER Miss Carol guessed Belgrade.     WOO HOO FOR YOU TOOOOOO!!!!!   You get the below badge for being RIGHT.

BUT there were some others who guessed it right as well and for all of you, I have this little gem: 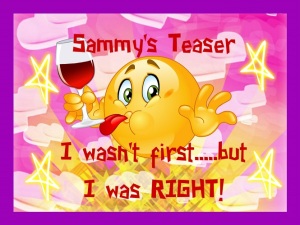 Everybody who didn’t guess right – don’t pout and don’t feel bad – you get credit for TRYING and you also get a GREENIE!!!!!!

Now wasn’t that just a TON OF FUN????   Why sure it was and I’m positive you can BARELY stand to wait until NEXT week when we tackle another mystery photo in Professor Angel Sammy’s GEOGRAPHY class with our ever interesting cast of wacky characters.    So until then…………

‘Scuze me Professor Sammy but I have a question.”

“Yes Bobby?  What is your question?”

“Professor Sammy if I bring you a nice red apple will that get me a better grade?  My Mom says when she was in school a million years ago teachers were easily bribed with apples and stuff and I just thought maybe I’d see if that’s something that YOU might like because I don’t think Sarge likes me and he’s always yelling at me and I wanna do good in Geography class so I just thought I’d ask and see how you felt………”

“WAIT a minute Tommy – catch your breath!  NO a teacher accepts no bribes for better grades – but I will say that if you try your hardest and learn all you can, both Sarge and I will be proud of you and you will get a good grade based on what you know, and not on what you GIVE to me OK?”

Yeah Kid…..you’re alright…..you go to the bathroom a lot but I don’t hold THAT against ya. Just don’t try to BRIBE your teacher or that will mean 100 push-ups!! Got it?

And on that note, I believe I’ll just say:

Have an Angelic WEEK!

From somewhere over the rainbow…..

58 thoughts on “Teaser Tell All”